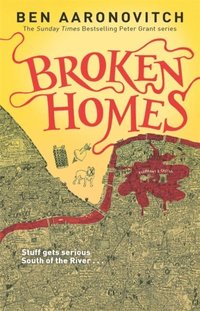 Broken Homes is the fourth book in the series by Ben Aaronovitch (following Rivers of London, Moon over Soho, and Whispers Under Ground). As before, we get to follow Peter Grant who works at the Metropolitan Police unit for supernatural cases in London, and has a personal relationship with most of the tributaries of the Thames.

The story starts with a number of seemingly unrelated cases: a Volvo involved in a traffic accident with far too much blood inside, a shallow grave with a young womann shot in the face with a shotgun, a strange suicide in the London underground, a German magic textbook showing up at a second-hand bookdealer, and a locksmith being cooked internally. All this, somehow, connects to Skygarden Tower at Elephant and Castel, a housing estate that is a fine example of the brutalistic architecture that seemed to have been so popular in the 1960s London city planning. This means that the centre of mass of the investigation is south of the river, something that Grant is not too happy about.

The book starts very promising, with a large number of different threads, but the red thread gets lost to some degree along the way. I have been fascinated by the particular architectural style that is prominent in the book ever since the time I spent living in London, so it is nice to see it as a plot element in a book. The story itself requires knowing many elements from the earlier books in the series for it to make sense. On the other hand, it not really for the story I read these books. It is more about the way the story is told. I enjoy the rather odd mix of detailed descriptions of the inner working of magic and of policework, and it is of course a bonus that I still understand most popular culture references in the text. The book ended in a very unexpected way where the main story may go in many possible directions, so it seems that I have to continue following the series to satisfy my needs for story conclusions.