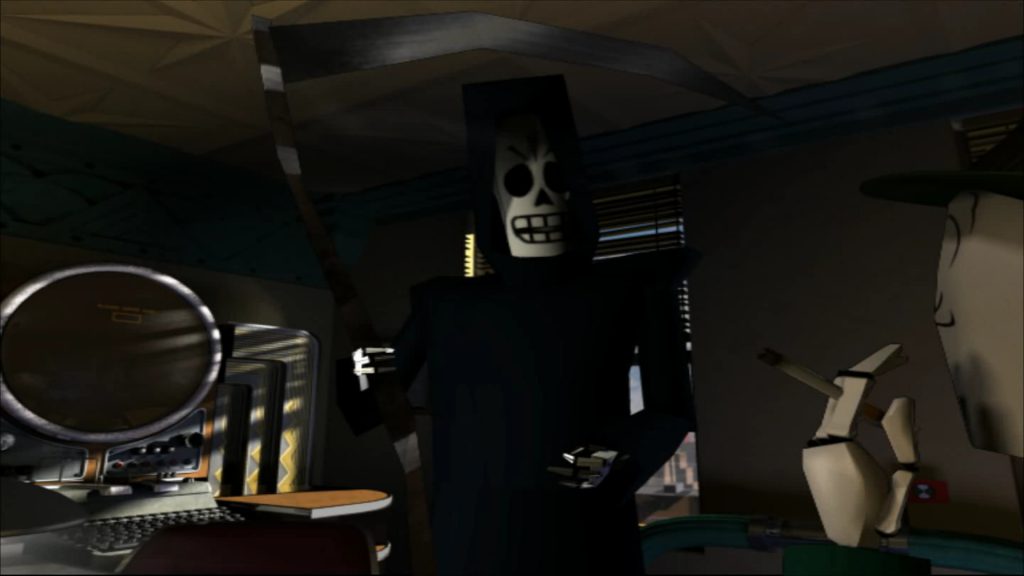 The time it takes for “anything” to become a classic depends largely on the the nature of this “anything”. A literary classic is rarely younger than 50 years and in architecture maybe 500 years is typical. The time perspective is a bit different for computer games. Grim Fandango is certainly a classic game, and has been for some time, although it is not yet even twenty years since it was originally released. More recently the game has been remastered, receiving the new title Grim Fandango Remastered in the process, to reach both a new audience and, naturally, the old and nostalgic audience that is firm in their belief that “games were better in the 1990s”.

Grim Fandango is an adventure game set in the Land of the Dead. Manuel (Manny) Calavera is a travel agent at the Department of Death whose work involve selling transportation to recently departed souls so that they can reach the gates of the Land of Eternal Rest. If the newly dead has lived a good life he/she/it can get access to better travel packages, which also would give Manny a better provision. However, for some reason Manny’s clients are always on the bad end of the goodness scale while his colleague Domino Hurley consistently gets the good clients, which leads to Manny stealing a promising client, Mercedes (Meche) Colomar, from Domino. Something strange is going on, though, since even if her heart should be pure enough for the best possible travel package, only the worst one is actually available. This realisation starts the epic adventure which takes place over four years (four acts in the game) and where Manny navigates through crime and corruption among the dead.

The whole game is soaked in a film noir atmosphere, complete with an adapting excellent soundtrack that follows the different settings in which the adventure takes place. The style of the characters, on the other hand, is based on Mexican calaca-figures. This contrast between the atmosphere and the styling makes the visual appearance of the game very distinct. And I like it. I also like the story, which manages to be original while still keeping the traditional elements in the film noir genre. I believe I am not the only one who enjoys this experience. It is clear though that the success of the game builds mainly on its atmosphere, its soundtrack and its story. On the other hand, the games suffers somewhat from the typical problem of all point-and-click style of puzzle based adventure games I have played: it seems to be extremely difficult to construct puzzles that are neither far too simple nor far too unintuitive. I found that I solved many puzzles in the game more or less by mistake, and only afterwards understood the logic behind them. There were also a small number of situations where I had to seek online help to be able to get further, but these situations were all of the type that I had missed an object I could interact with somewhere, or that there were an area I had not realised I could access. At least I am proud to be able to truthfully say that I solved at least the fourth act in the proper manner.

What is most noticable for the player from the remastering process in Grim Fandango Remastered is that the graphical representation of the characters has been modernised as well as the controls. For me, the most important remastering effort is that the whole soundtrack has been fully orchestrated (using Melbourne Symphonic Orchestra). There were some minor glitches in the game which are not expected to be found in a game that has had almost twenty years to mature, but I only encountered one that forced me to restart from an earlier save. That is a minor issue in a game that I truly enjoyed.