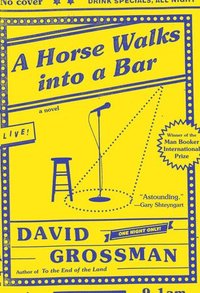 An aging comedian, Dovaleh Greenstein, has invited a childhood acquaintance to visit his stand-up gig in a bar in an Israeli town called Netanya. When this long lost friend, the court judge Avishai Lazar, asks why the response is that Dovaleh wants him to see and to later tell what was seen. The evening starts with a set of jokes for the relatively large audience, but as the evening goes on, Dovaleh begins to delve into the sorrows of his childhood and a large trauma while the audience starts thinning out as more and more disappointed comedy customers leave the bar. In the end of the stand-up set only a handful people remains to hear where and how the story ends. A Horse Walks into a Bar by David Grossman describes this two hour long comedy evening through the eyes and the recollections of Avishai, the judge.

The form of the story is really interesting, with it taking place during one single stand-up comedy set. However, it did not really manage to keep my interest up through the whole routine. I assume that there is a certain chance that I would be one of the many people in the audience leaving the show before its end. The actual core event in the story that Dovaleh tells at the stage, simply took too long to unfold to keep me satisfied. There is a chance that the tempo in the book fits the story better if the book is read in a more focused fashion than how I did it. In addition, the actual core event in Dovaleh’s recollection from his childhood is actually a really interesting situation: To be transported to the funeral of a parent without knowing which of the parents that is dead.