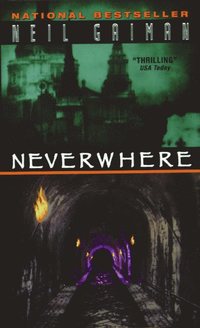 Once again I have dived into a book about the London that is hidden from view. In Neverwhere Neil Gaiman describes London Below – the city beneath the City, inhabited by the people that have fallen through the cracks as well as by fantastical characters an mythical beings. Inthe book we follow the adventures experienced by Richard Mayhew in abandoned underground stations and Victorian sewer tunnels, after he helps a bleeding girl in bad shape that he finds on the pavement instead of accompanying his fiancé at an important dinner with her influential, and even more important, boss. He learns about the dangers (such as why the gap should be minded) and some of the history of London Below while trying to save it all and return to London Above.

After reading the book I learned that the first incarnation of this story was as a TV-series produced by BBC. This background explains the somewhat linear progression of the plot, the, at times too detailed, visual descriptions and some weak characterisations. These peculiarities are well compensated by the fantastic world which Gaiman lets us catch a multitude of glimpses of, and the thrilling story itself. It is an entertaining book that was a perfect read for me in small, but frequent, doses, so that it would last a little longer.