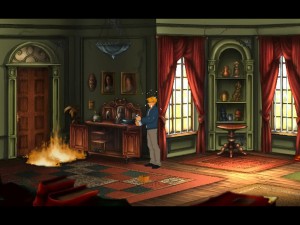 It all begins when George is accompanying Nico to archaeology professor Oubier’s large Parisian mansion to gather information about a Mayan stone that she has found during her investigations. Suddenly George is hit in the head and rendered unconscious and subsequently tied to a chair. Nico is struck by a blown poisoned dart and then carried away. When leaving, the kidnappers make sure to put the house on fire and to let a large poisonous spider loose. All this is mixed with scenes from a human sacrifice (?) ceremony at a pyramide in central America. When George eventually wakes up, the game starts.

Broken Sword 2 – the Smoking Mirror: Remastered is an old game. The original version of the game (the un-remastered version) was released in 1997, and I enjoyed playing it on my PC already back then. Now I have replayed the game in a remastered Android version, and it is still enjoyable.

This is a point-and-click adventure game, which is a kind of game that transits very well to be played on touch-screen tablets. The problem solving is of varying difficulty, but the solutions are never too difficult or far-fetched in contrast to some other games of this age in this genre. The voice acting is good, and the musical score builds the mood efficiently. The cut-scenes are well done in a cartoon style but they progress in a quick tempo that do not correspond to the pedestrian tempo of the rest of the game. After some of the cut-scenes I was wondering what actually happened and why I ended up at this or that particular location.

The story in the game is almost completely linear, which helps when playing the game in the way I played it this time. I played it in many short sessions while cooking, eating, waiting and travelling and it is then convenient to not have too many simultaneous problems to solve in a game.