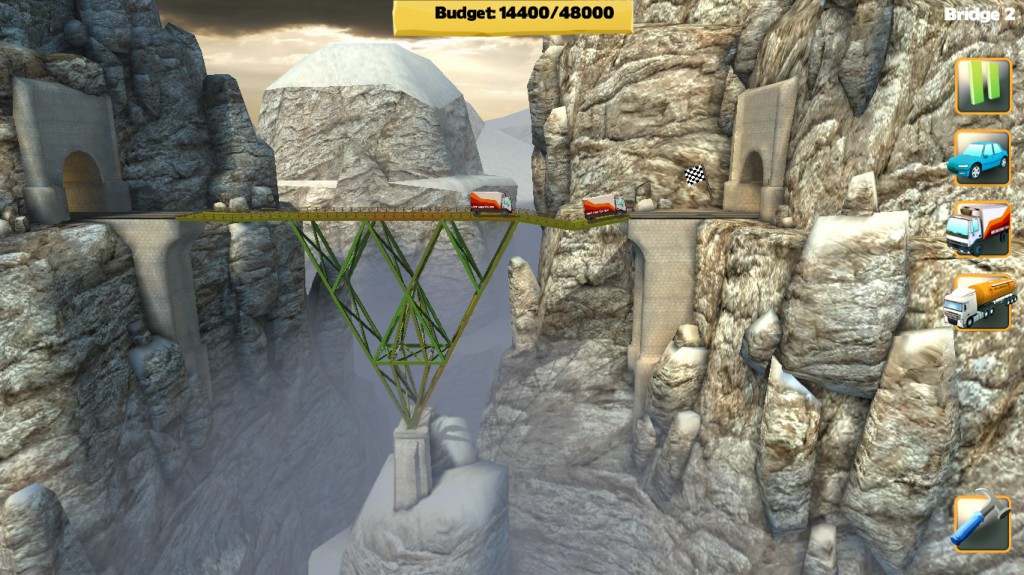 I have played Bridge Constructor now and then during this summer. The game is a nice and simple way to waste some time. I have mostly played the Android version of the game, but I have also played the Windows version to a sufficient extent to be somewhat annoyed by the minor differencies between the two versions.

The story in the game is very straightforward. There has been a devastating earthquake that has destroyed the bridges on the islands of Camatuga and the player is in charge of their rebuilding. The problem for the player is that the available budget for the bridge constructions is very tight, so it is not possible to make too advanced solutions or to use the more expensive materials as much as would be ideal. After building the bridges, they have to be tested by letting some cars and/or trucks cross and if the bridge collapses a rethink the design is needed. When all bridges on Camatuga are functioning for trucks, the game opens up for tests using heavy tanker trucks on the newly constructed bridges, with an often sad and explosive result prompting a redesign of the bridges. This is actually the part where the differences between the two versions of the game are noticable. Several of my tanker-proof bridge designs on Android would fail in Windows.

Sometimes the statics of the bridge constructions seem a bit off with collapsing at unexpected places, but usually some engineering common sense and experimenting will solve the problems. It would have been nice to be able to play some of the levels with unlimited budget in order to test some truly exotic bridge designs, but the game is good enough as it is.

This is not a game to spend full evenings with because of its repetitive nature, but it is a relaxing game to play for a couple of minutes now and then. Quite a bit like sudoku.